The Ciù Ciù di Offida (AP) winery, headed by Walter and Massimiliano Bartolomei, received  “Talenti e Imprese” award, created by Banca del Piceno to enhance local business excellence, now in its fifth edition. The awards ceremony took place today in Verona, at Vinitaly, at the Marche Region stand, where Walter and Massimiliano Bartolomei received the award in the presence of Anna Casini, vice president of the Marche Region, and Francesco Merletti, deputy director of the Bank of the Piceno Cooperative Credit.

“This recognition makes us particularly happy and proud, because we receive it from an important bank in the Piceno area, and because it is a symbol of how fundamental it is to cultivate talent in the territory where we are born. – says Walter Bartolomei – This has always been the philosophy of Ciù Ciù, so it is extremely gratifying to see it rewarded. “” We are proud – declared the deputy director of the Banca del Piceno Francesco Merletti – to reward one of the picene wineries that most embodies the authentic expression of the territory and the territory has given voice with a wide range of wines “. 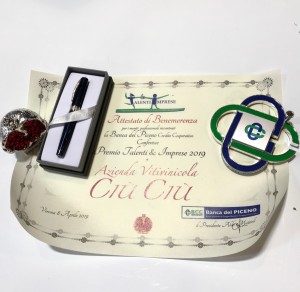